al-Anfal from the Quran

The word “Anfal” is taken from the eighth chapter (Sura) of the Quran; “al-Anfal” which contains 75 verses (Aia). Some of the 75 verses are about war and its spoils. 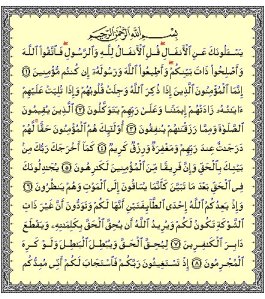 The use of the word Anfal

The Sura calls upon the prophet Muhammad and his followers to fight against the non-believers, until the final triumph is reached. The final victory was to either eliminate the enemy or forcing them to accept the Muslim faith and rituals, and thereby making them, give up their own faith and religious rituals.

Saddam’s use of the Quran

Even though the name of the campaign against the Kurds is taken from the Quran, Muslims say that Saddam’s version of this chapter differentiate from the Qurans version.

The Iraqi police adopted the name Anfal in their genocidal campaign against the Kurds in the Northern Iraq, using the verse to justify their battle from an Islamic view, claiming it to be a battle against the non-believers even though a large number of the Kurds are Muslims.
This was a way to gain the support of the Iraqis, and by claiming to fight a so called “Muslim war” he would also gain the support of other Muslim countries in the Middle East.

The old Anfal from the seventh century demanded victory over non-believers and encouraged the destruction of their faiths and religious culture. It also encouraged the looting and possession of the enemy’s articles, items and other material goods.
The Baath regime conducted a similar attack against the Kurds in the areas referred to as the “forbidden areas”. They looted the villages for any items and other material goods. They killed or prowled house animals, destroyed and burned the villages to the ground.
The habitants of these villages were sent to complexes, jails or straight to death. This death could be in terms of starvations or mass graves.

Saddam and his military had prior to the “al-Anfal campaign” against the Kurds used Islamic names for their wars. This had been seen previously, in a battle against Iran “The battle of saad bn al-Waqass” and again during the eight year war against Iran from 1980 – 1988, “al-Qadissiat al-saddam”.
Qadiddia is the name of a battle against the non Muslims during the early islamization in the seventh century.

In September 2003, six months after the U.S. invasion of Iraq, the autonomous government of Iraqi Kurdistan built a towering memorial on the outskirts of the farming town of Halabja, near the border with Iran. At its opening ceremony, cheering crowds greeted Secretary of State Colin Powell and other U.S. officials. “What I can tell you is that what 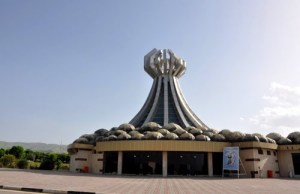 happened here in 1988 is never going to happen again,” Powell said. But the sleek, modern museum and monument stood in stark contrast with the town it was built to honor. Halabja itself remains largely in rubble, and the HalabjaMonument is the only new building that the regional government has constructed in more than a decade. With a population of 80,000, the town has no paved roads, poor infrastructure, and scarce water and electricity supplies. Intended to serve as a symbol of civilian suffering under Saddam Hussein’s regime, the monument became a flash point for frustration about the lack of development in Halabja. The HalabjaMonument commemorates one of the worst atrocities of the Saddam Hussein era. On March 16, 1988, Hussein ordered army planes to drop mustard gas and the deadly nerve agent Sarin on the Kurdish farming town. About 5,000 men, women and children were killed in the attack. Another 10,000 were injured and many still suffer from respiratory illnesses, physical deformities, cancer, and other diseases. Over time, many Halabja residents came to view the memorial as a symbol of the government’s persistent inaction, incompetence, and corruption. On March 16, 2006, the 18th anniversary of the attacks, 150 demonstrators gathered in front of the memorial to block an official visit. Security forces fired shots into the crowd. A 17-year-old was killed in the resulting riot, and a dozen people were wounded. By the end of the day, between 3,000 and 5,000 town residents had joined the protest. In a seemingly spontaneous fashion, the demonstrators set the memorial on fire. At present the structure remains standing but is severely damaged. Ninety-five percent of the museum’s artifacts and art pieces were burned. Shortly after the riot, the Kurdish government pledged US$30 million to rehabilitate Halabja. Their efforts now focused on basic services such as water, roads, and health care. Lack of funds has indefinitely delayed any progress in refurbishing the damaged memorial. In June 2006, Sarkhel Ghafar Hama-Khan, a former teacher, was hired as the memorial’s new director. He said that engineers have assessed the amount of work needed to restore the monument, but that concrete steps have yet to be taken.

730 Anfal victims returned and laid to rest in Suleimaniah

730 Anfal victims returned and laid to rest in Suleimaniah

Suleimaniah, Kurdistan Region – Iraq (KRG.org) – The remains of 730 Kurdish people shot through the head or buried alive as part of the former regime’s Anfal genocide campaign were returned to their homeland on Monday for a ceremony in Suleimaniah and reburial the following day.

The bodies were recovered from a mass grave in the deserts of the Mahari area of Diwania Province in southern Iraq where they were discovered last year. They were identified as Kurdish victims of the Anfal campaign that were massacred by the former regime in 1988.

In the ceremony to commemorate their return to the Region, KRG Prime Minister Nechirvan Barzani said, “The graves of these martyrs which stand in front of us are the symbol of all our martyrs.” Adding, “What we have achieved until today is a result of the blood of these martyrs, who sacrificed their lives for the sake of Kurdistan and the Kurdish people, and we therefore promise to defend all these achievements until our last breath.”

“Those who have been executed for committing these crimes are the exception,” the Prime Minister said. “Fundamental changes are still needed since there are still people trying to protect the former regime’s ideology, and it is possible that the same thing could happen to us again. Today, some political parties in Iraq are following the same path as the former regime,” he said, concluding that it is for this reason that the KRG is trying to create a strong adherence to the rule of law and the constitution in order to not allow another dictator to rule in Iraq again.

More than 4,500 villages were destroyed during the Anfal campaigns and over 180,000 people were murdered or disappeared. The campaign has been recognized as genocide by the Iraqi Council of Representatives and the Iraqi Tribunal Court as well as a number of international organizations.

Most of the victims were found to be from Chamchamal, Kadar-Karam and Garmeyan province, so they were all reburied in Chamchamal on Tuesday near a monument that was built in remembrance of the genocide. Kurdistan President Masoud Barzani participated in the burial service on Tuesday.

The ceremonies were organised by the KRG Ministry of Martyrs and Anfal Affairs, and the event in Suleimaniah was also attended by Vice President Kosrat Rasul Ali, Speaker of Kurdistan Parliament Dr Arsalan Bayiz, Minister of Martyrs and Anfal Affairs Sabah Ahmed Mohamed, as well as some members of the Iraqi and Kurdistan Parliaments, the Mayor of Sulaymaniyah, the British Consul General to Kurdistan Region and a number of other officials.

3/27/2003: WASHINGTON, DC: 30 min.
Professor Gosden discusses the medical and health consequences of the use of Weapon of Mass Destruction by the Iraqi regime against the civilian population of Iraqi Kurdistan in Halabja and 200 other locations during the genocidal Anfal campaign directly ordered by Saddam Hussein.

Where is Halabja?
Halabja is a small town in the governorate of  Sualimaniyah in Iraqi kurdistanIt lies 250 km north-east of Baghdad and 11 kilometers from the Iranian border.

What happened in Halabja?

On March 16th 1988, Iraqi jets bombed the town of Halabja with chemical weapons.  At least 5,000 people were killed and 7,000 severely injured.  Fourteen years on, thousands are still suffering the affects of the chemical weapons.

The gases used included mustard gas, nerve agents sarin, tabun and VX.  This was the largest chemical attack on a civilian population ever.

Iraqi forces under the command of Ali Hassan Majid, infamously known as Ali Chemical by the Kurds, were responsible for this despicable act of inhumanity.

Background
The Government of Iraq carried out a genocidal campaign against the Kurds during 1988, near the end of the Iraq-Iran War.  It was conducted under the codename “Anfal.”  The Anfal was a campaign carried out in several stages primarily between February and September 1988 and was to be the Iraqi government’s permanent solution to the Kurdish problem.

Of all the atrocities committed against the Kurds during the Anfal, Halabja has come to symbolize the worst of the repression of the Iraqi Kurds. Halabja was a town of between 40-50,000 people located about 11 kilometers from the Iranian border. It became the target of conventional and chemical bomb attacks over three days in March of 1988.

During those three days, the town and the surrounding district were unmercifully attacked with bombs, artillery fire, and chemicals. The chemical weapons were the most destructive of life. The chemicals used included mustard gas and the nerve agents sarin, tabun, and VX. At least 5,000 people died immediately as a result of the chemical attack and it is estimated that up to 12,000 people in all died during the course of those three days.

Tahsin A. othman, a Kurdish blogger from Erbil, the capital of the Kurdistan Regional Government (KRG). He works for Ministry of Martyrs and Anfal affairs as I.T manager. He can be reached at tahseen_azez@yahoo.com, or you can follow his blog